skip to main | skip to sidebar

Why Obama's Presidency Failed: The Book that Got It Right 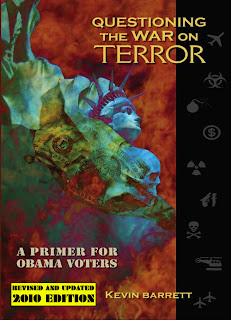 Dr. Kevin Barrett's book Questioning the War on Terror: A Primer for Obama Voters explains, in straightforward language backed by hundreds of references, why Obama's presidency was doomed from the start...unless his base forced him to declare peace.

Just about everyone - left or right, Democrat or Republican - admits that Obama has been a disappointment. Republicans say he's too liberal. Democrats say he's too conservative. Both say he's a wimp.

But the real reason Obama's presidency failed can be summed up in three words: "War on Terror."

The USA is still "at war." But this war makes no sense. Trillions, perhaps tens of trillions, of dollars have been wasted fighting an imaginary enemy.

Obama inherited a nation driven insane, a nation quixotically at war with an abstract noun. He failed to end that war in the only way it could be ended: by declaring it a hoax, a farce, and a fraud. Had he done so - and had he revealed that 9/11 was an elaborate publicity stunt, not a real enemy attack - he would have had a peacetime presidency and plenty of money to make it a success. Instead, he is headed for the dunghill of history. And so is his country...unless its citizens wake up and take it back.

The first edition, published in July 2009, sold out in six months. This new, updated second edition features 20 pages of all-new material covering developments in late 2009 and 2010.

Dr. Kevin Barrett has lectured on "Questioning the War on Terror" in New York, California, Illinois, and Wisconsin. To book a lecture, email kbarrett*AT*merr*DOT*com.

New second edition of Questioning the War on Terror is now available! 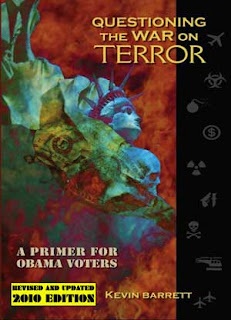 The first edition, published in July 2009, sold out in six months. This new, updated second edition features 20 pages of all-new material covering developments in late 2009 and 2010.

Dr. Kevin Barrett has lectured on "Questioning the War on Terror" in New York, California, Illinois, and Wisconsin. To book a lecture, email kbarrett*AT*merr*DOT*com.


Posted by Khadir Press at 7:27 AM No comments: 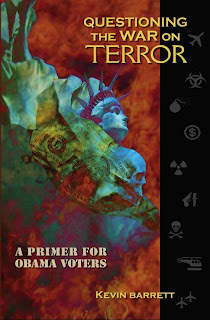 "Americans have now joined the rest of the world in regarding the war in Iraq as illegitimate because based on lies. Kevin Barrett's book shows that the same is true of the war in Afghanistan. President Obama's promise to base his administration's policies on good intelligence should, therefore, lead him to bring this war to a quick end."–David Ray Griffin, author of The Mysterious Collapse of World Trade Center 7: Why the Final Official Report about 9/11 Is Unscientific and False

“Kevin Barrett is taking on a big sacred cow, one that hardly anyone in the mainstream media or in Congress would dare to seriously question—The War on Terror, which in the past eight years has joined the flag, motherhood and apple pie as things an American dares question only at the risk of being labeled ‘unpatriotic’ or a ‘supporter of terrorism’. Barrett delves into many of the assumptions behind the The War on Terror: the myths, the lies, the propaganda. The reader should be prepared to question some of his favorite political beliefs.”
–William Blum, author, Killing Hope: US Military and CIA Interventions Since World War II

“This book raises a number of basic questions...they are worth exploring and evaluating.”
–James Petras, Professor Emeritus, SUNY-Buffalo,
author, Rulers and Ruled in the US Empire